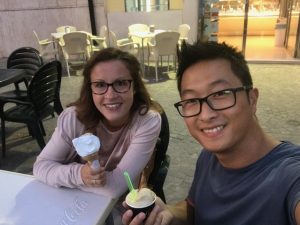 When he was three years old, Oong moved with his parents to London from Seoul, South Korea.

In 2013, Oong graduated with a BA in Theology from the London School of Theology, where he also met his Italian wife, Elena, who he’s been married to since 2016.

Oong splits his work time between his role as pastoral assistant at New City, Calvary Korean Church, and a project manager of Streetlytes.org, a local charity that supports the homeless and vulnerable in West London.

Oong is passionate about cultivating a community under the Lordship of Christ from the various British immigrant generations, as well as the multiethnic people of London.

Any cookies that may not be particularly necessary for the website to function and is used specifically to collect user personal data via analytics, ads, other embedded contents are termed as non-necessary cookies. It is mandatory to procure user consent prior to running these cookies on your website.